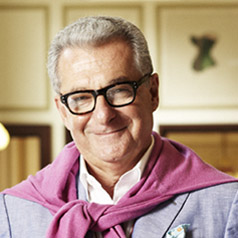 After attending the Politcnico di Milano- School of Architecture and Urban Planning, Tihany apprenticed in renowned design firms in Italy. In 1978, he established his own firm that encompassed everything from commercial and residential interiors to furniture, products, exhibitions, and graphics. After creating La Coupole, the first grand cafe in New York City in 1981, his practice began specializing in hospitality design. In 1987, Tihany became a co-owner in Remi restaurants, which he owned and operated for the following 25 years. Tihany later collaborated with celebrity chefs, including Wolfgang Puck, Thomas Keller, Daniel Boulud, Charlie Palmer, and Sirio Maccioni of Le Cirque fame, for which he created eight restaurants. His recent hotel projects include the One&Only Cape Town Resort in South Africa, the Mandarin Oriental Las Vegas, and the Joule in Dallas. He has also designed venues for the Beverly Hills Hotel in Los Angeles, the Cipriani Hotel in Venice, the Breakers in Palm Beach, the Broadmoor in Colorado Springs, and more. He was recently appointed art director of the Culinary Institute of America for modernizing the Hyde Park campus. He is an educator, frequent speaker, contributor to magazines, and award recipient. He has written two books, Tihany Design and Tihany Style, with a third underway.