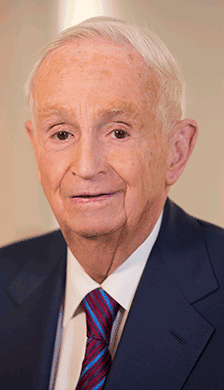 J.W. Marriott, Jr. is executive chairman and chairman of the board of Marriott International, Inc., the largest lodging company in the world. Marriott’s leadership spans more than 60 years, as he guided what was once a family-run root beer stand and restaurant to a global hospitality company that is today comprised of 6,500 properties across 30 brands in 127 countries and territories. In September 2016, Marriott finalized its largest acquisition ever, acquiring Starwood Hotels and Resorts. Marriott served 40 years as Marriott’s CEO, before stepping down on March 31, 2012.

Marriott’s passion for the hospitality industry began at an early age. He spent his high school and college years working in a variety of positions in the family’s Hot Shoppes restaurant chain. He became a full-time associate in 1956, and soon afterward began managing the first Marriott hotel. He became president of the company in 1964 and CEO in 1972. He was elected chairman of the board in 1985.

Throughout his career, Marriott has been known industry-wide for his hands-on management style, which is built on his parents’ chief core value of putting people first. The Marriott corporate culture emphasizes the value that associates bring to the organization. Today, there are more than 675,000 associates at Marriott headquarters, corporate offices and at managed and franchised hotels.

Marriott is also known as a lodging innovator—shifting the company’s business model in the late 1970s from hotel ownership to property management and franchising. His strategic decision allowed the company to accelerate its growth and broaden its leadership position. That transformation culminated in the company’s split in 1993 into Marriott International—a hotel management and franchising company headed by Marriott—and Host Marriott International, a hotel ownership company chaired by his brother, Richard Marriott.

In January 2007, Marriott on the Move, one of the first regular corporate CEO blogs was launched. Marriott’s award-winning blog extends further his global reach and influence that complements his well-known visits to hundreds of hotels annually.

Marriott grew up in the Washington, DC area, where he attended St. Albans School.  At the University of Utah, he earned a bachelor’s degree in banking and finance, and went on to serve as an officer in the United States Navy. Marriott is an active member of the Church of Jesus Christ of Latter-day Saints, and is married to the former Donna Garff. They are the parents of four children, and have 15 grandchildren and 20 great grandchildren.