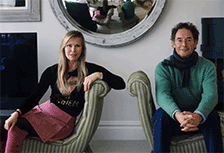 “Hotels should be living things not stuffy institutions,” say Tim and Kit Kemp, cofounders of the Firmdale Hotels, with eight boutique concepts in London and one in New York. The high standards of excellence and unique townhouse style of decoration have added up to a winning combination over the years, with Kit Kemp spearheading the interior design with a fresh, modern English style which became their signature. Ms. Kemp was also named the Andrew Martin International Interior Designer of the Year in 2008, as well as many other accolades. In addition, Firmdale Hotels has also received numerous awards, including the Queens Award for Enterprise three times, for  its outstanding achievement to international trade.