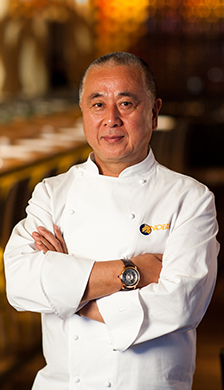 Nobuyuki Matsuhisa—known to the world simply as “Nobu”—is the co-founder of Nobu Hospitality and the acclaimed chef proprietor of the Nobu, Matsuhisa, and Ubon restaurants—located across three continents.

Born and raised in Saitama, Japan, Nobu served a rigorous apprenticeship at a respected sushi bar in Tokyo before his dreams of seeing the world moved him to open a sushi bar in Peru. A classically trained sushi chef, Nobu was challenged by the new culture and regional ingredients, which kindled his inventive style—known today as “Nobu Style.” After three years in Peru, he moved to Argentina, then home to Japan, then on to Alaska, and finally to Los Angeles. He opened Matsuhisa in Beverly Hills, California in 1987.

Matsuhisa was virtually an overnight success, and Nobu quickly achieved fame within the culinary community. In 1994, in partnership with actor Robert De Niro and restauranteur Drew Nieporent, Nobu opened “NOBU” in the Tribeca section of New York, again to glowing reviews.

Currently residing in Beverly Hills, Nobu spends most of his time traveling to his restaurants and visiting prospective sites for new locations. He also donates his time to numerous culinary and charitable events each year.