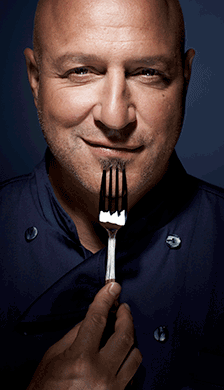 Born and raised in Elizabeth, NJ, Tom Colicchio made his New York cooking debut at prominent New York restaurants including The Quilted Giraffe, Gotham Bar & Grill, Rakel and Mondrian. Since then, he has seen critical acclaim for Gramercy Tavern (with Danny Meyer), his signature venture Craft (2001), and Colicchio & Sons (2010), all in New York.  Craft was awarded The James Beard Foundation Award for “Best New Restaurant” in 2002, the same year Colicchio received The Bon Appétit American Food and Entertaining Award for “Chef of the Year.” The New York Times revisited Craft in September 2011, ten years after its debut, upholding its three stars and stating that the restaurant is “as magical and delicious as it was when it opened.”

Following Craft and its casual sibling, Craftbar (2003), Colicchio opened Craftsteak at the MGM Grand in Las Vegas (2002), Craft in Los Angeles (2007), which received three-and-a-half stars from the LA Times and has been named to Jonathan Gold’s annual 101 Best Restaurants, Colicchio & Sons (2010), which received three stars from the New York Times, Riverpark in New York (2010), which received two stars from the New York Times, and Heritage Steak at The Mirage in Las Vegas (2013). Outside of his fine dining restaurants, Colicchio opened ‘wichcraft – a sandwich shop rooted in the same food and hospitality philosophies as Craft – in New York City in 2003; ‘wichcraft now has eight locations across the country. In 2015, Tom opened Beachcraft, Tom on Collins and The Sand Box at 1 Hotel & Homes South Beach and will open Fowler & Wells at The Beekman Hotel, a historic landmark in downtown NYC in summer 2016.

Colicchio has published Think Like a Chef (2000), which won The James Beard Foundation “KitchenAid” Cookbook Award in May 2001; Craft of Cooking (2003); and a sandwich book inspired by ‘wichcraft (2009). In May 2010, Colicchio was awarded The James Beard Foundation’s coveted “Outstanding Chef” award, the culmination of his 30 years of hard work in the restaurant industry.

Since 2006, Tom has been applying his experience and expertise to cable television as the head judge on Bravo’s hit reality cooking series “Top Chef.”  The Emmy-winning show is currently in its 13th season. In January 2015, Bravo premiered “Best New Restaurant,” a new series where Tom applied his expertise as the host.

Tom appears in and served as executive producer on A Place at the Table, Participant Media’s documentary about food insecurity in America, produced and directed by his wife, Lori Silverbush, by Kristi Jacobson. A Place at the Table, which premiered at the 2012 Sundance Film Festival and was released by Magnolia Pictures in 2013, has become the launchpad for a national movement centered on ending hunger in the United States.

In an effort to broaden his long-standing social and political activism, Tom co-founded Food Policy Action in 2012 in collaboration with national food policy leaders, in order to hold legislators accountable on votes that have an effect on food and farming. He has also been an outspoken voice on issues like GMO labeling and the use of antibiotics in food sources, and he continues to lobby for better anti-hunger policies in America.

Tom and his restaurants give back to the community by serving on the boards of Children of Bellevue, City Harvest, Wholesome Wave and Food Policy Action.  He lives in Brooklyn with his wife, Lori Silverbush, and three sons. When he’s not in the kitchen, Tom can be found tending to his garden on the North Fork of Long Island or enjoying a day of fishing.